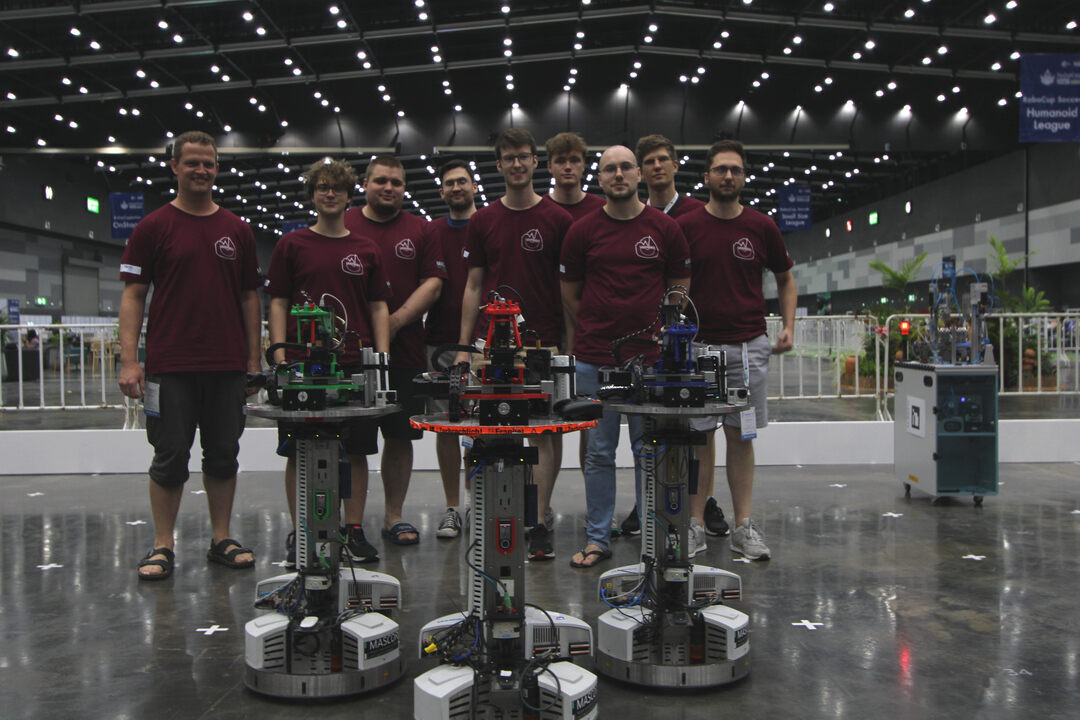 Conducted in Bangkok, Thailand, this year’s competition was the first one organized in presence with respect to the pandemic and thus teams were able to compete with the rules and regulations evolved from the real and virtual competitions conducted during the recent iterations. In order to qualify for the main track, teams had to show their capabilities in a challenge track and produce a simple product in the Logistics League. Afterwards the main track followed where initially the robots had to find the production machines on a randomly created playing field. In the following production phase the robots then had to carry out orders of increasing complexity to fulfill orders. In the final matches scoring “Best of 5“ Team Carologistics came out on top with 411 points, clearly ahead of team GRIPS from TU Graz (270 points). Two additional teams from Switzerland and Japan competed in the challenge track additionally.

“A successful participation at the competition of RoboCup requires extraordinary preparation which emphasizes the powerful cooperation between the universities despite the circumstances of the pandemic. I’m happy to felicitate the team for their successful participation at RC 2022 for their seventh world championship title!”, said Prof. Alexander Ferrein, Director of the MASCOR Institute at FH Aachen. With respect to the hygiene regulations the team was able to prepare on-site in presence with some members participating remotely.

“Competing in presence after two years of virtual competitions confronts the team with the practical problems in robotics with respect to the challenging setting at RoboCup. The succesful participation of the team during the recent virtual competitions and the experience from the past years rendered a well prepared team. Looking forward for next year’s competition in Bordeaux!“, says Prof. Gerhard Lakemeyer, head of the Knowledge-Based Systems Group at RWTH Aachen University. RoboCup 2023 is scheduled to take place in Bordeaux, France.